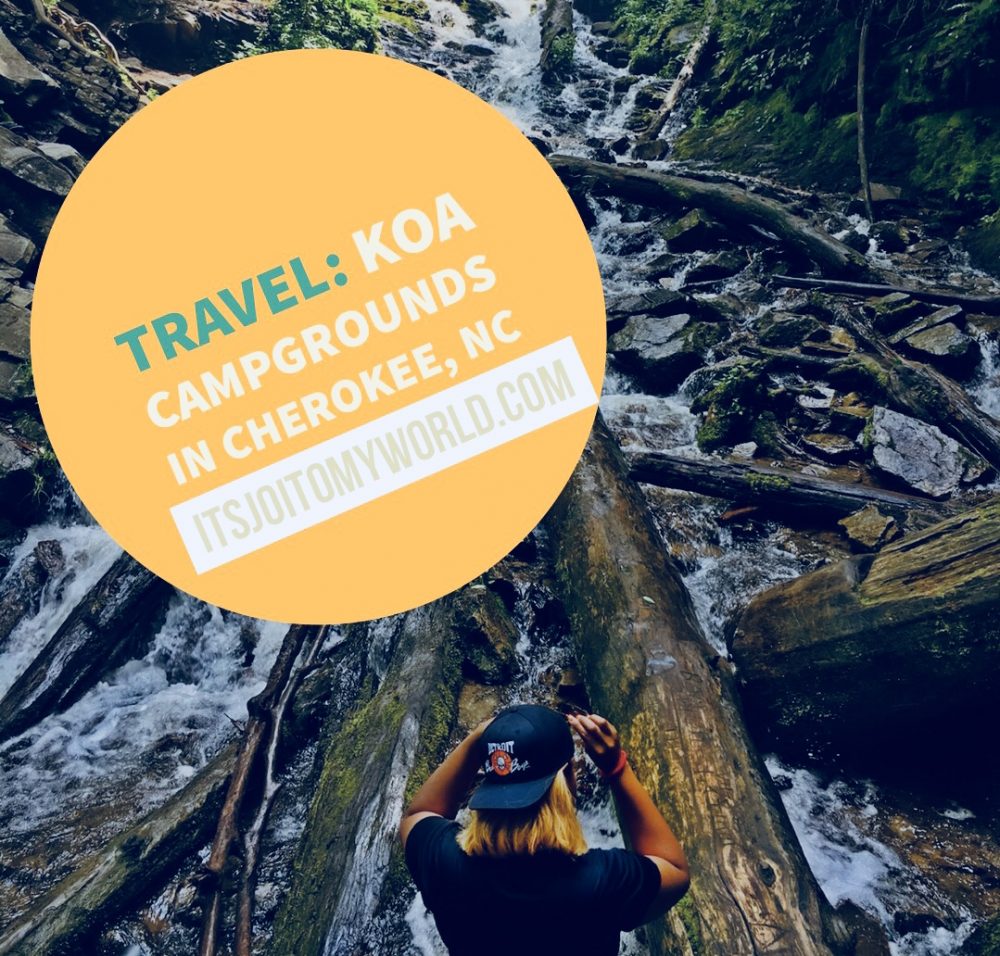 Around The World/ Travel

I went camping quite a bit as a kid and really enjoyed it.  Also, when I was in college (the first go round), I worked for 3 months as a Girl Scout leader at a summer camp in Tallahassee, FL .  Somehow along the way I forgot how much fun it is to discover and appreciate the simple things in life, nature.  This past weekend I teamed up with Go Rving and KOA Campgrounds to take a couple of friends on a road trip to KOA Campgrounds in Cherokee, NC and share with my readers my awesome adventures! 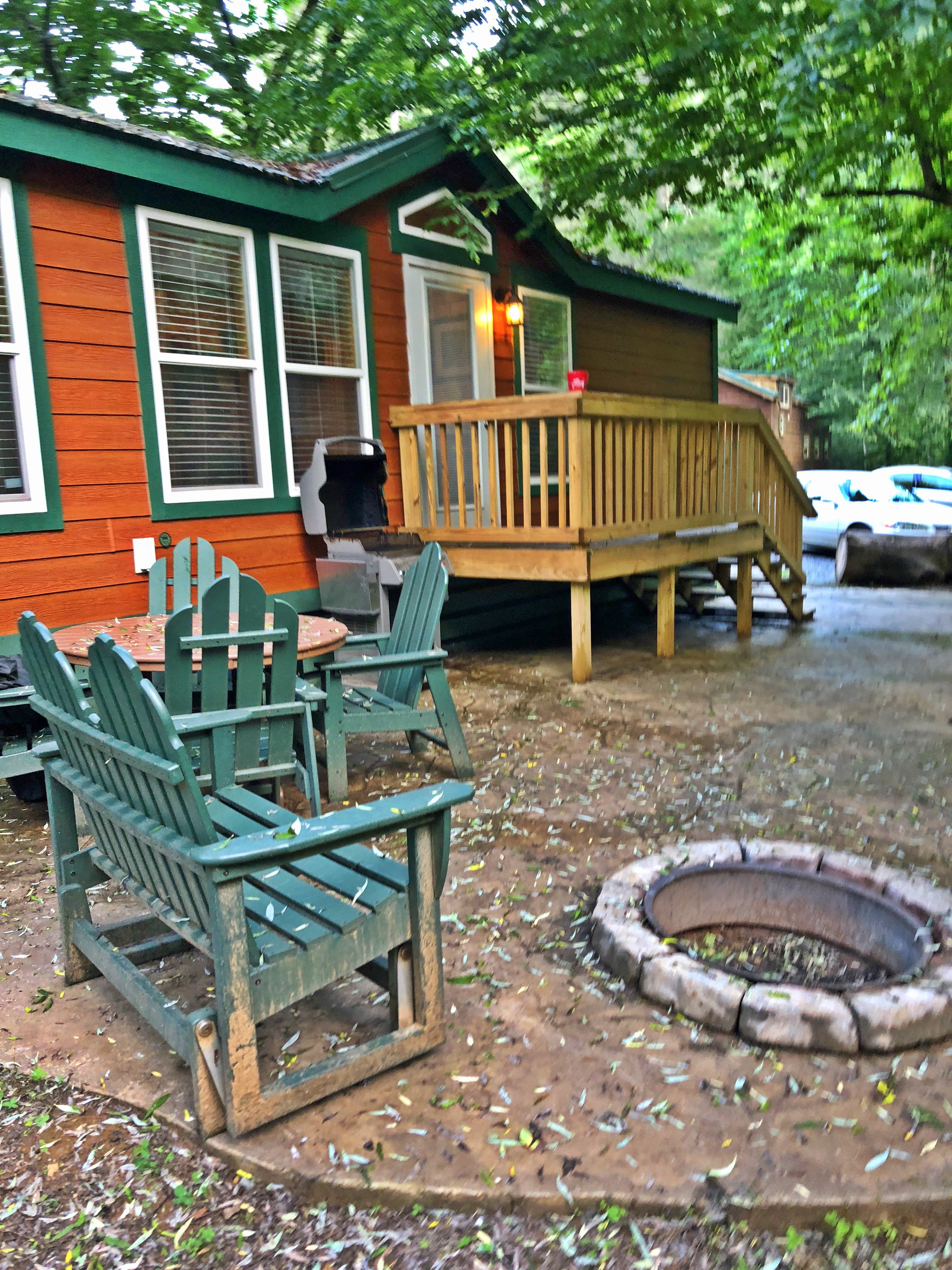 Our cabin for the weekend

We left Atlanta a little after 5 p.m. on a Friday (if you know Atlanta traffic, then you know this part was a bad idea ha!) and arrived at the campgrounds a little after 9:30 p.m.  It was pitch black outside, but luckily the KOA after hours staff greeted us at the front gates and led the way to our cabin.  Our cabin was their ‘Deluxe Cabin-Full Bath w/ Shower, KOA Patio’.  Click here for more lodging options and pricing at KOA Cherokee, NC.Saturday morning I made breakfast for my friends Pam and Winnie. The cabin came with a stove, fridge, microwave, toaster, coffee maker, kitchen utensils, dishes, pots and silverware.  Clearly we weren’t “roughing it ” 100%, but this was an awesome introduction to it. The pancakes came out a little burned BUT the mimosas made up for it!  In addition to the two bedrooms, there was a living space with a mounted tv, a table for four, and a pullout couch equipped with linen. 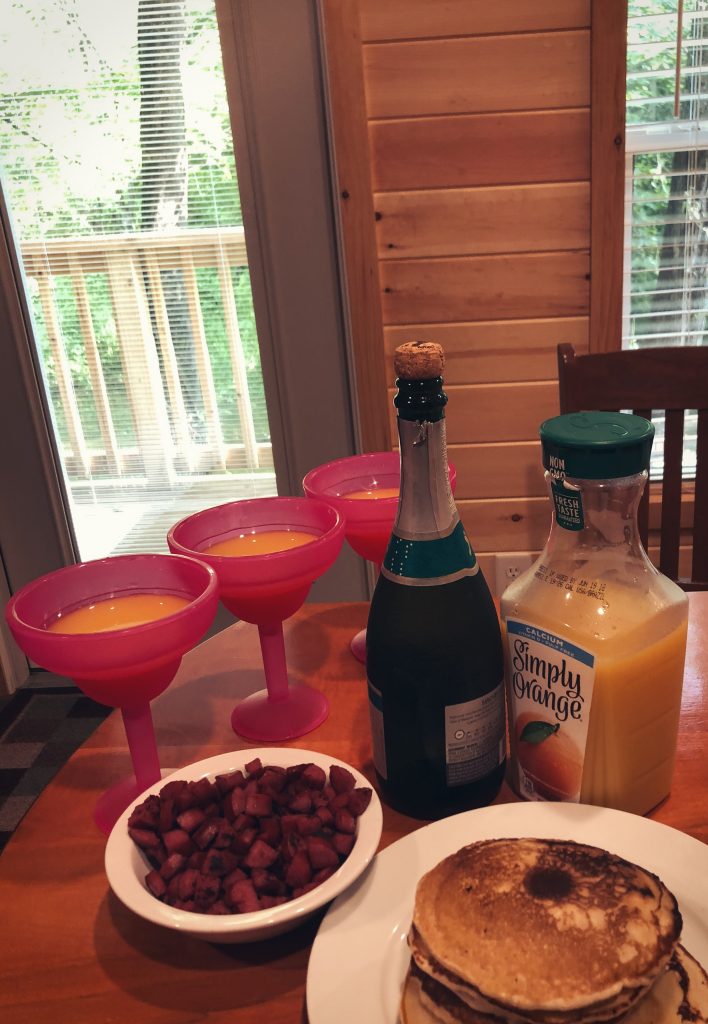 After breakfast we decided to walk off the calories and go for a hike. 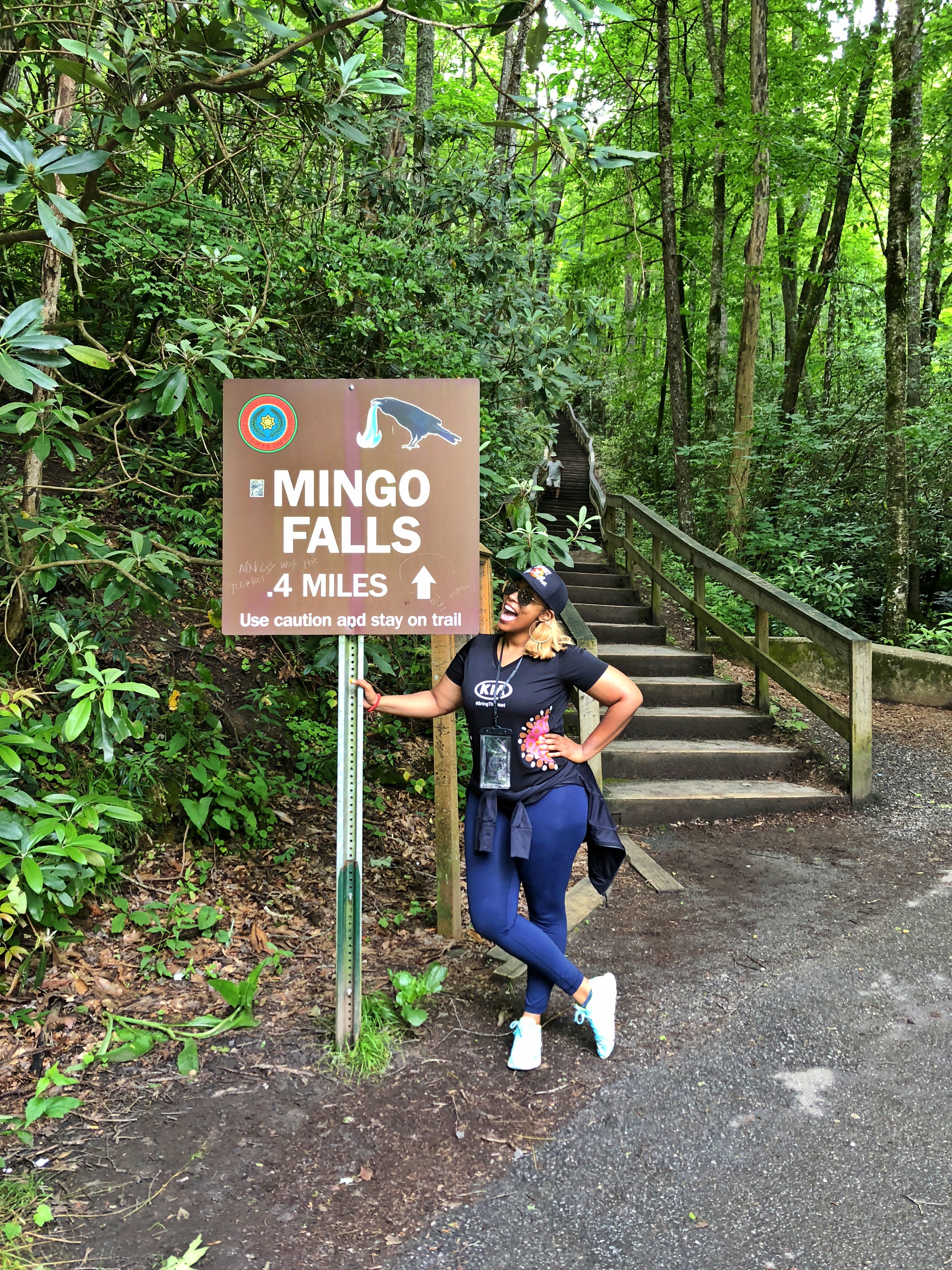 We discovered Mingo Falls, a waterfall that’s only about 9 min. from the campground and maybe about a little less than a 10 min. walk from the bottom to the top viewing area.  Luckily the weather was working in our favor and it was only about 80 degrees with no rain in the forecast until later that day. 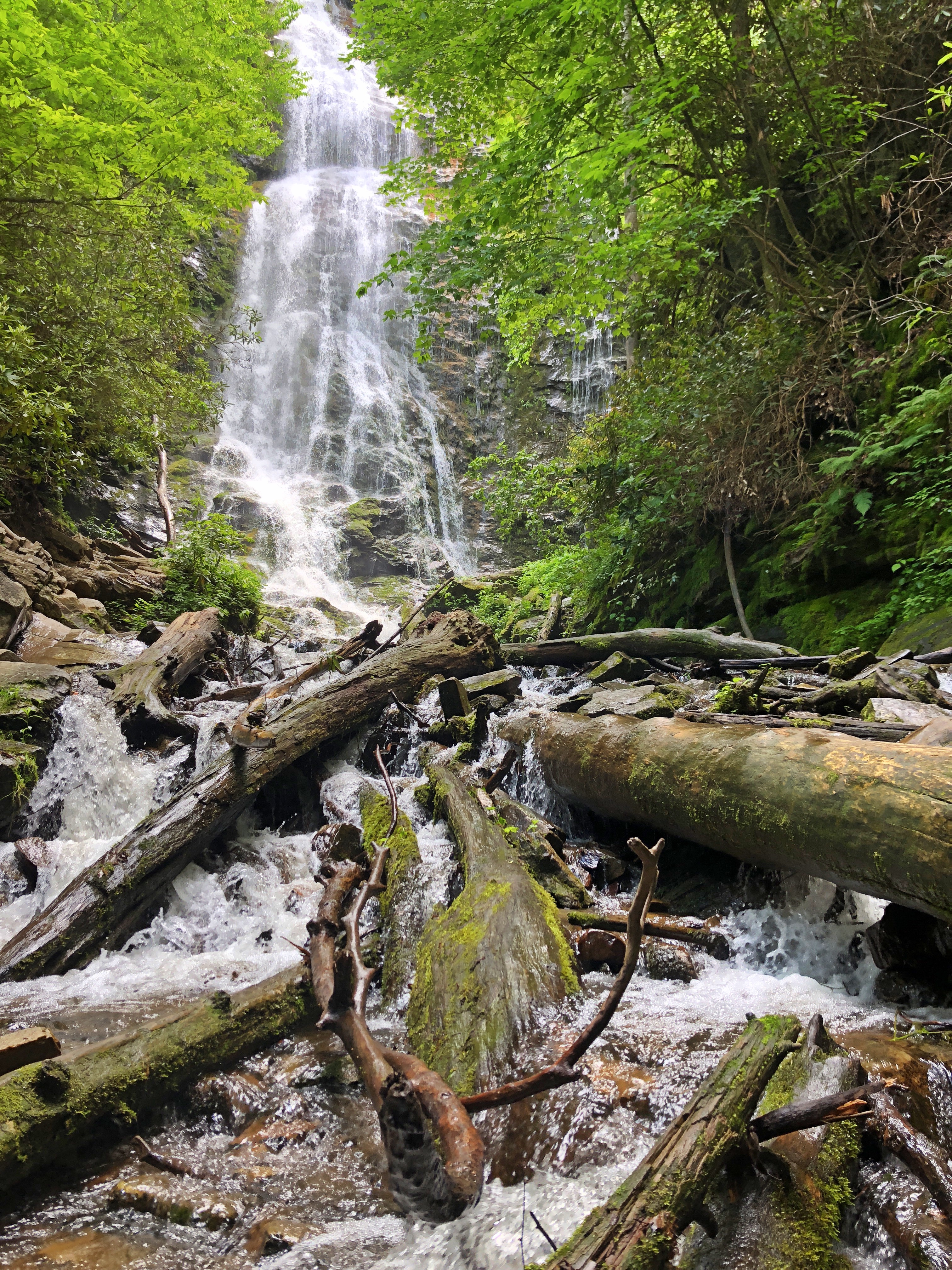 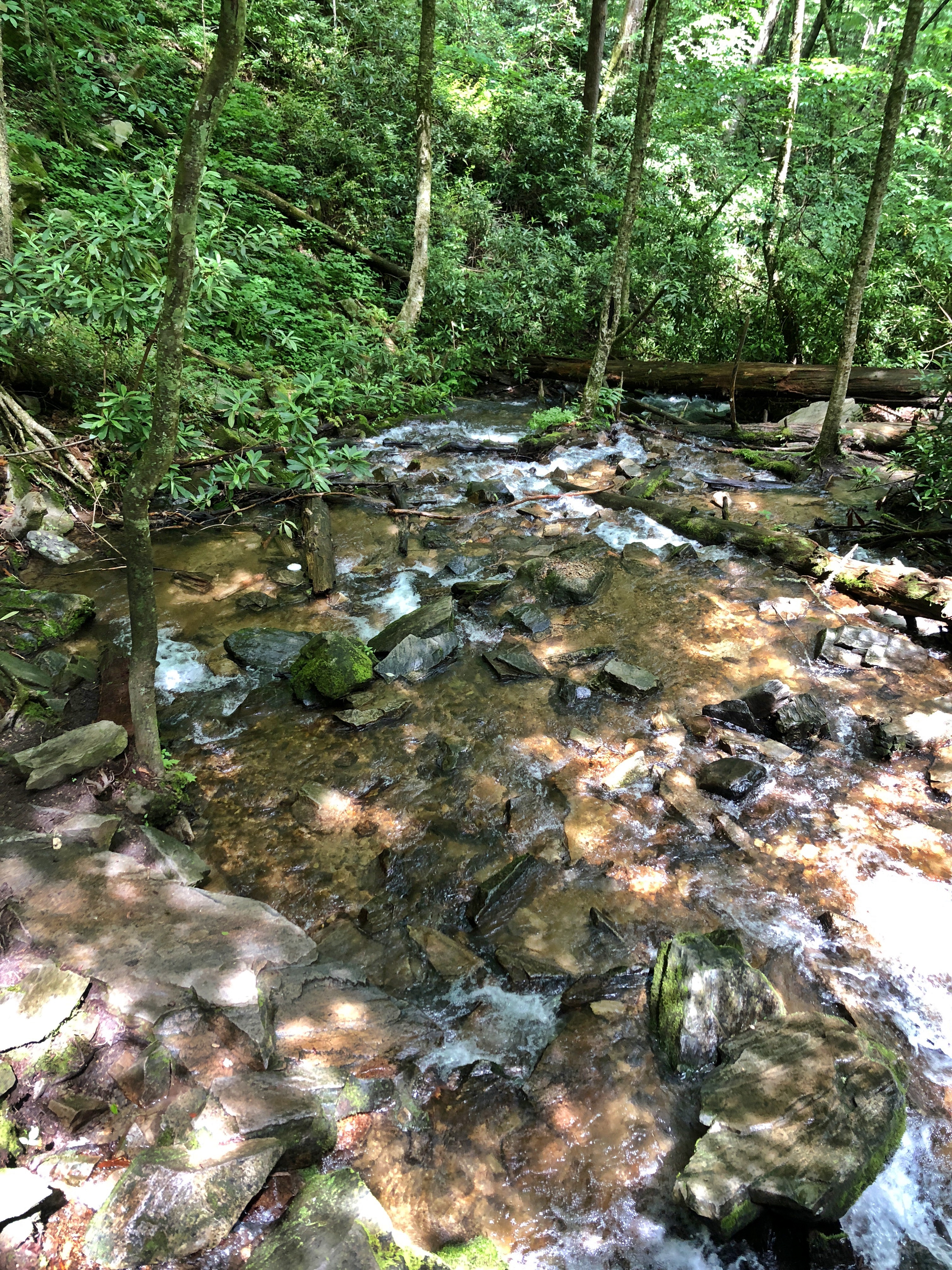 Photo from the hike to Mingo Falls 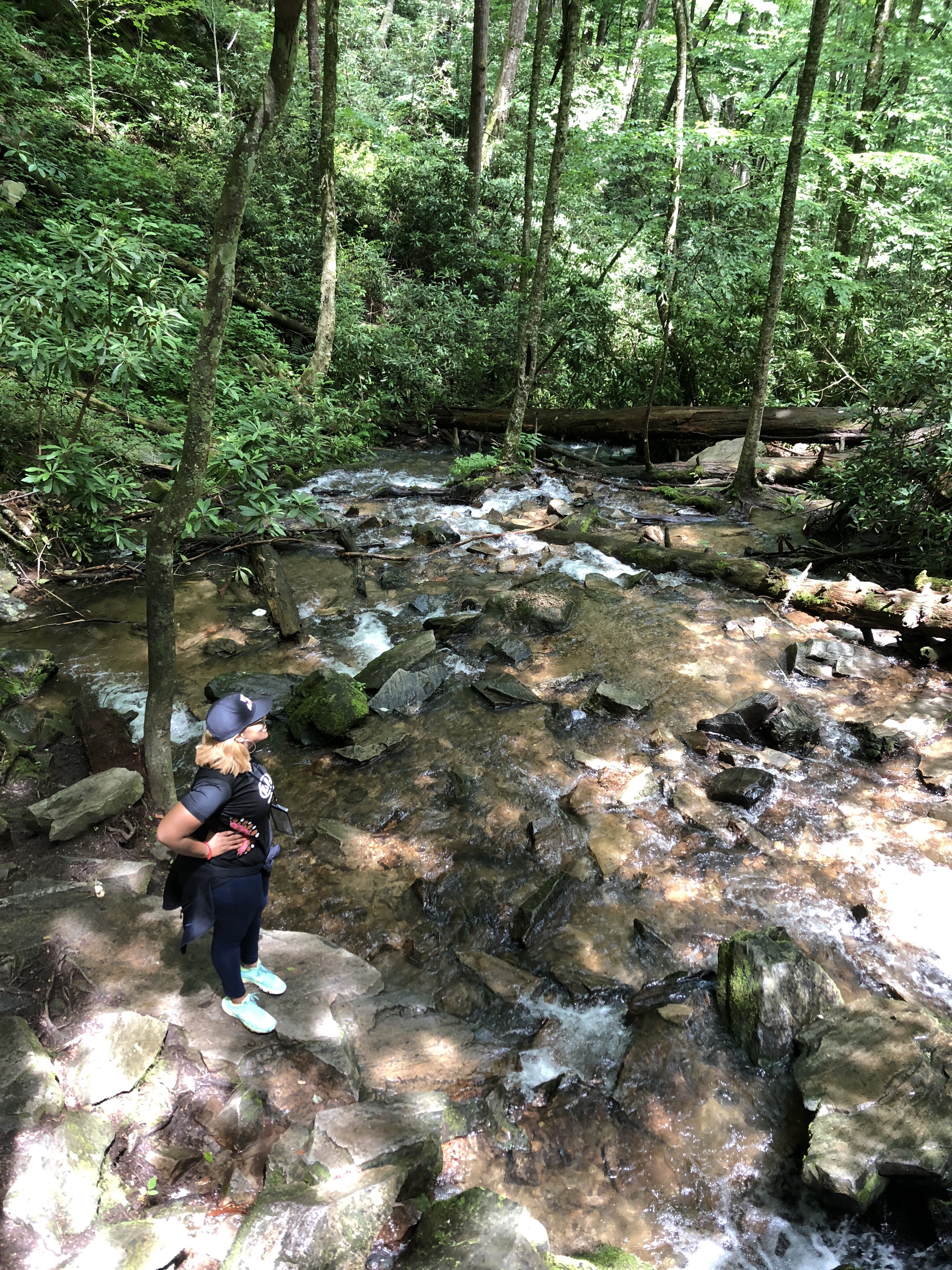 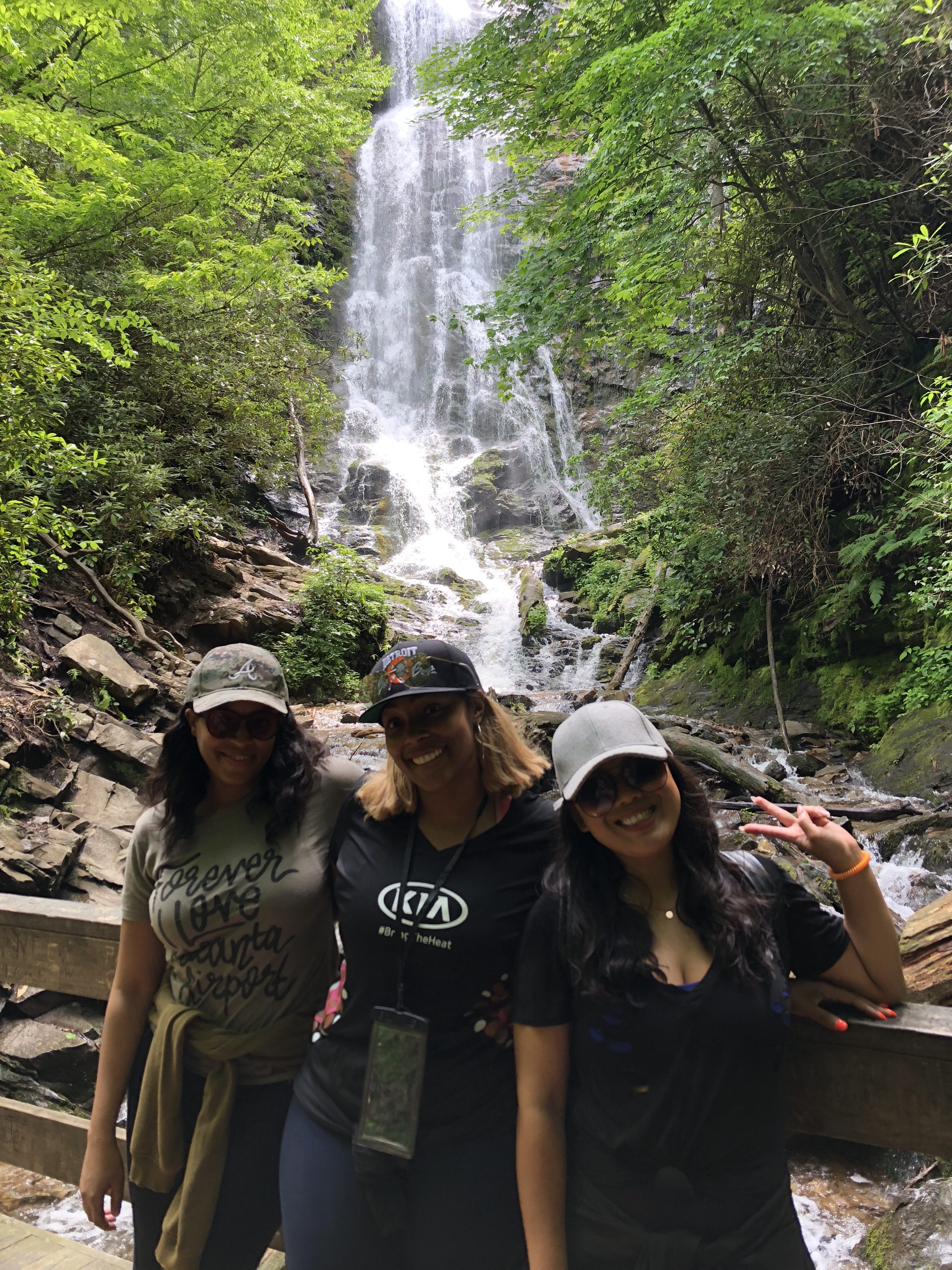 My friends Pamela and Winnie

After Mingo Falls, we went on a 3 hour horseback ride to another waterfall in the area.  There were other riding options too if you would like to take a shorter ride of 1.5 hours and I believe there was a longer than 3 hour option as well.  We were going to pay a visit to the casino nearby afterwards, but we had no clue how draining horseback riding was.  We decided to go back to the cabin, shower, cook dinner on the grill, and start a campfire.

FYI, bringing this citronella candle along was the best idea EVER!  Between this and insect repellent, I went home with ZERO mosquito bites. 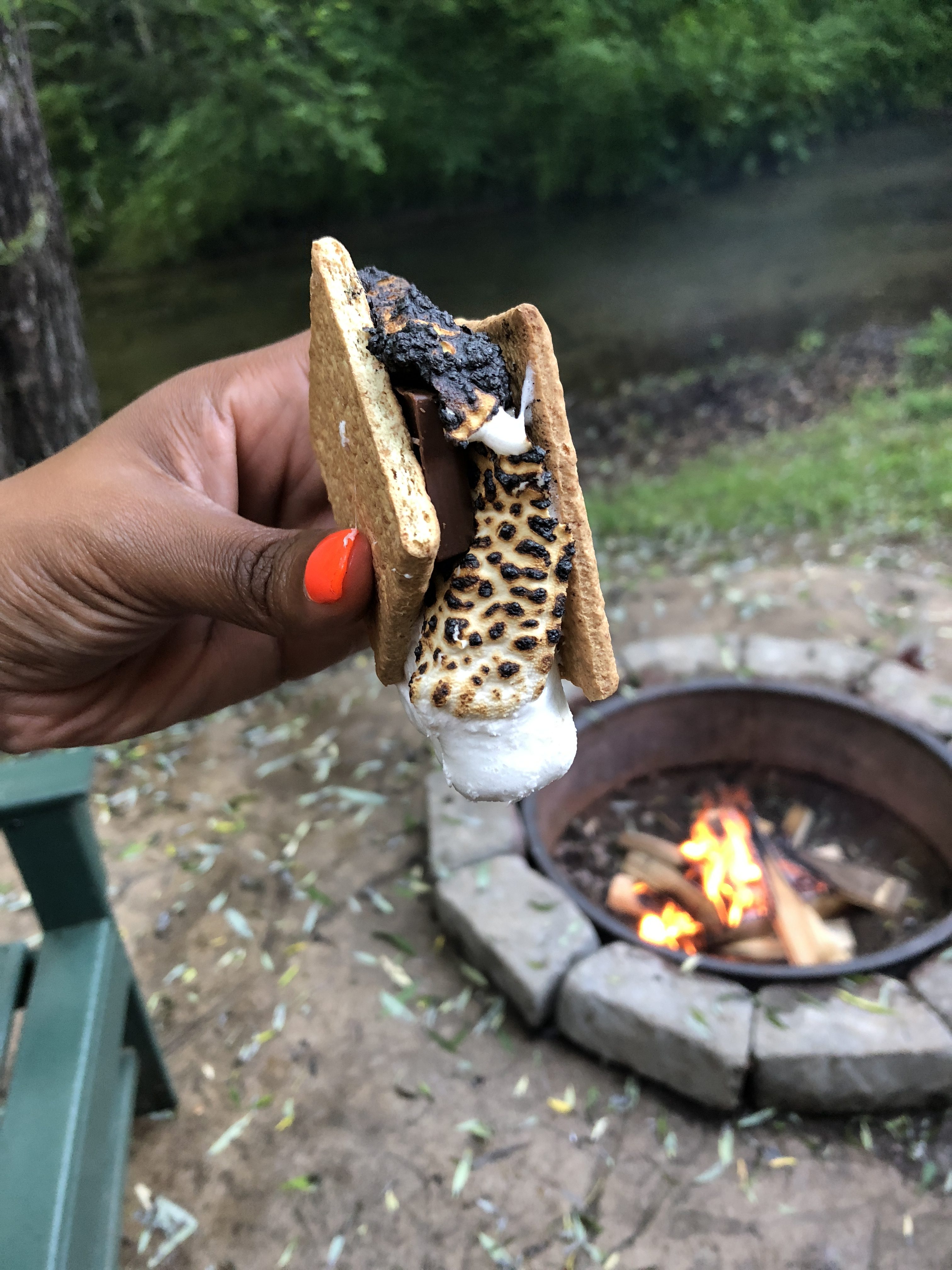 We closed the night out with a little girl talk and face masks from Target at the campground. 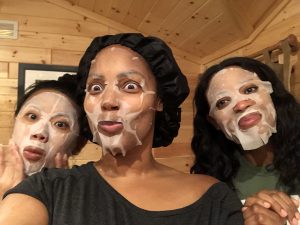 Check out more behind the scenes of our road trip in action by checking out my Youtube video below! 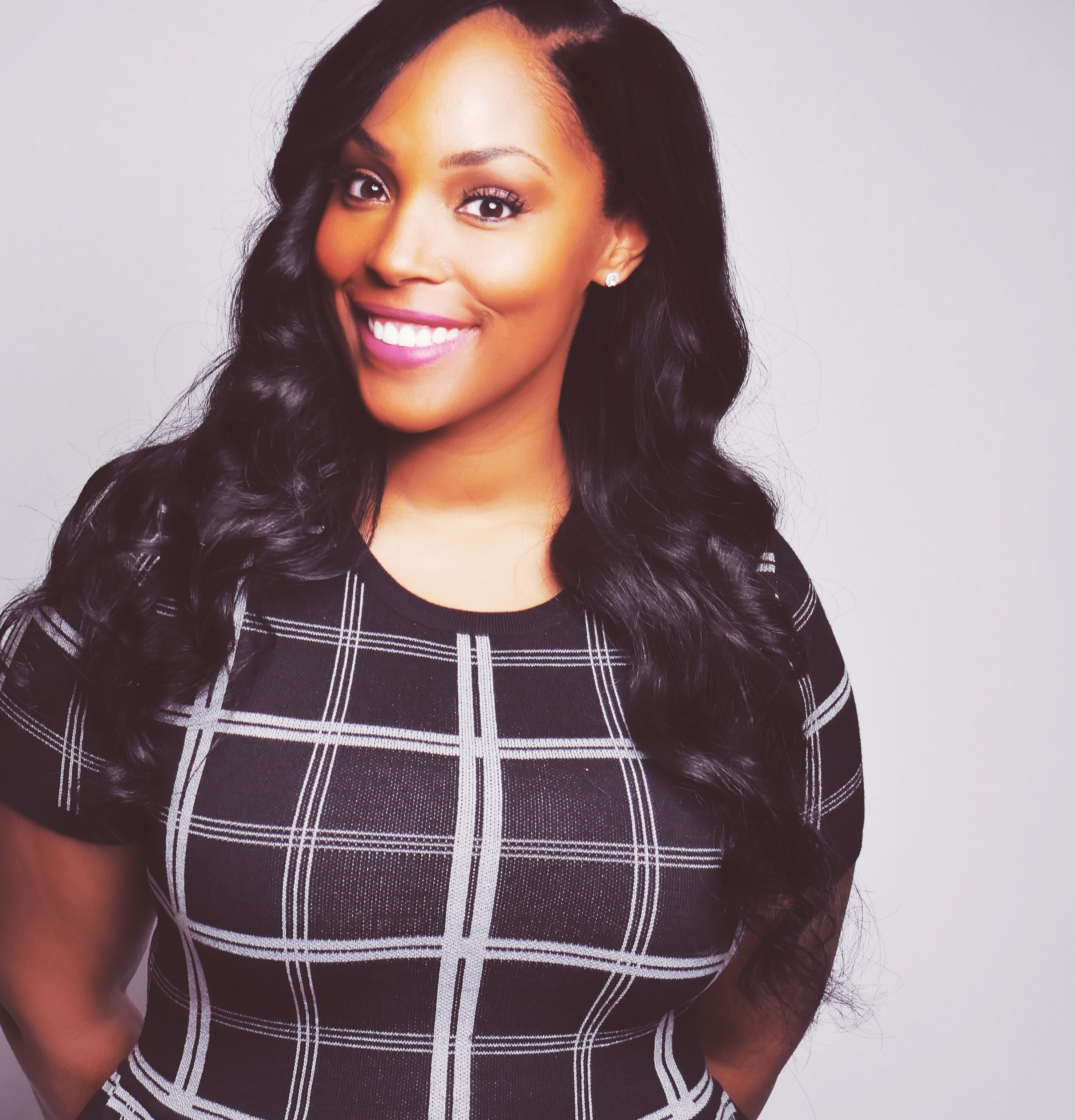 Itsjoitomyworld.com is a lifestyle blog that incorporates all of the fun elements of life: Travel, Beauty, DIY projects, and a little mommy advice. Also, feel free to browse our shop for cool handmade products! 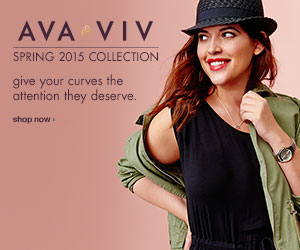 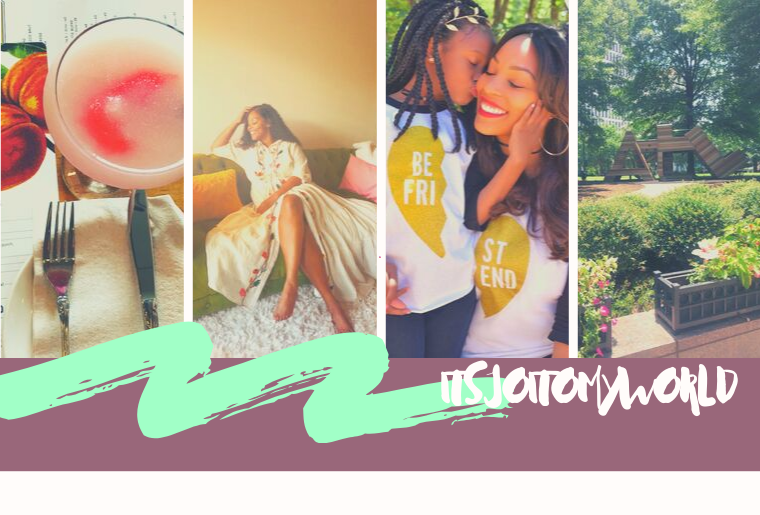